For the first time, we celebrate World Food Day 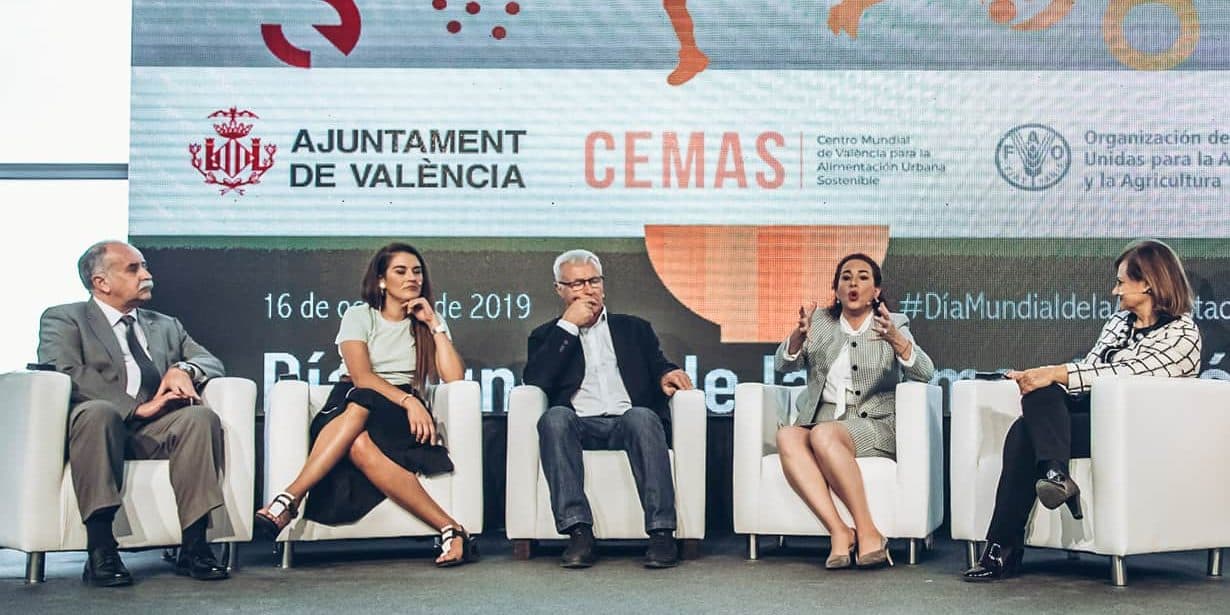 The CEMAS facilities have hosted the celebration of World Food Day for the first time. Public administrations, institutions, universities, various organizations and civil society gathered together in one event to highlight the urgent need for all of us to commit to working in order to achieve #zerohunger with sustainable and resilient food systems. The mayor of València, Joan Ribó, and the director of FAO-Spain, Enrique Yeves were hosts to the proceedings conducted by the director of CEMAS, Vicente Domingo. The 73rd president of the Assembly of the United Nations, Mª Fernanda Espinosa, the Regional Minister of Agriculture, Mireia Mollà and the High Commisioner of the Government of Spain for the 2030 Agenda, Cristina Gallach also participated.

Joan Ribó announced that València has a historic opportunity to be chosen to install CEMAS, and has asked for the collaboration of all of its citizens. He presented the fundamental aspects of the municipal food strategy and expressed his gratitude for the work done by FAO over many years because “freeing humanity from hunger is the most significant and sublime challenge that one can aspire to”.

In this regard, Enrique Yeves, director of FAO-Spain, undertook a review of the latest available figures which are not positive, indicating that 820 million people worldwide are undernourished, and that there are two thousand million adults who are overweight and following an unhealthy diet, which has become one of the greatest health risk factors in the world. He asserted that the number of starving people “is a moral, ethical, social and political scandal”.

For her part, the 73rd president of the Assembly of the United Nations, Mª Fernanda Espinosa affirmed that there is nothing more important than food and good nutrition, and that it is not possible to continue with the current model. She added that the strengthening of sustainable local food systems is the right path to take, as well as the democratization of knowledge. She appeared to support the rethinking of the present patent system due to its connection with monocultures and the seed monopoly, and encouraged CEMAS to become a centre for the democratization of knowledge.

The Regional Minister for Agriculture, Mireia Mollà advocated meeting the challenge of feeding seven thousand million people in the world through sustainable food systems that take care of people, the land and the planet. For her part, Cristina Gallach, the High Commisioner of the Government of Spain for the 2030 Agenda, highlighted the fundamental mission that all public administrations have in order to achieve the 2030 objectives, a task that cannot be undertaken alone. In this sense, she advocated partnership to create “transformative alliances” and emphasized the role which CEMAS should have in the field of knowledge and training. In the opinion of Cristina Gallach, global synergies must be promoted with local action so that the 2030 agenda becomes part of daily life. You can watch the entire ceremony here.