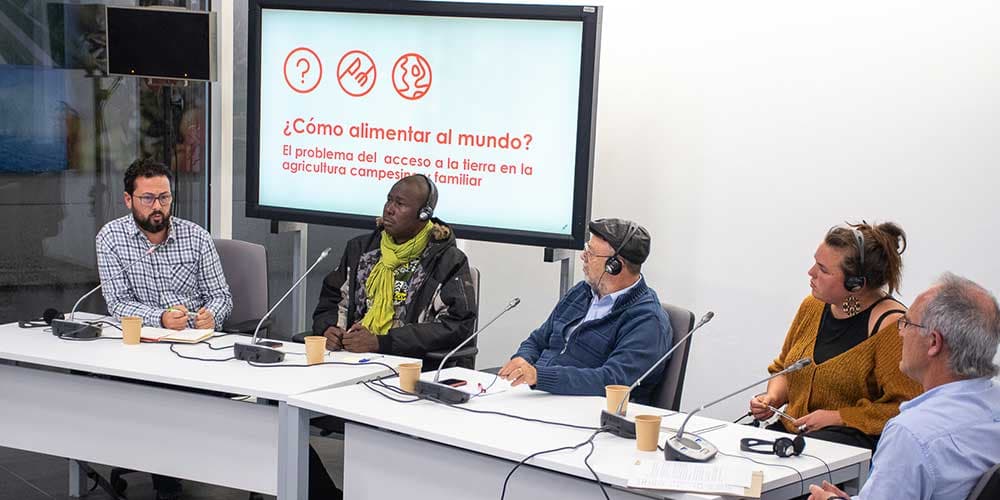 On 20th and 21st April, CEMAS held the meeting of the Follow-up Committee of the Forum of Struggles for Land and Natural Resources (FLT) where they discussed how to feed the world and the problem of access to land in peasant and family farming.

Iñaki Liceaga, from CERAI and moderator of the event, pointed out that 70% of the population is fed thanks to peasant and family farming. In addition, Massa Kone (CGLTE-AO spokesperson) assured that this sector employs 60% of the people in Africa.

Alberto Broch (president of  COPROFAM and vice-president of  CONTAG) stated that if this type of farming disappears in Brazil, “it will be a disaster, not only in terms of the loss of food sovereignty and security, but also in terms of the development of culture and identity”. From a European perspective, Fanny Métrat (livestock farmer and activist of Confederation Paysanne) pointed out that “France and Europe have lost 70% of farmers since the launch of the CAP, as a result of support for industrial agriculture”.

Juan Clemente (representative of CCPV-COAG) also highlighted the consequences of industrial agriculture: pollution caused by long supply chains, dependence on agrochemicals, loss of biodiversity and depopulation of the rural world.

In conclusion, those present stated that it is necessary to increase the participation of farmers in the creation of public policies, as well as that of consumers.