The challenge of sustainable livestock farming

With the help of cinema, anyone can imagine themselves visiting the Middle Ages and find themselves in the middle of a fortified city. In the only market there is, it is possible to get a little bit of everything: chicken, honey, dried beef… and anyone who can afford to buy some of this will know perfectly well where that food comes from because, quite simply, the animals are there, visible and very close to the people: on the outskirts of the cities, even in their streets. It happened in the Middle Ages, and it happened in the following centuries. Because, until the industrial revolutions increased the size of cities, it was possible to see the coming and going of livestock, smell the poultry pen and even select the animal that a person wanted to take to his or her kitchen while still alive. Then everything changed and the old market in the centre of the city became obsolete.

Today, there are billions of us who simply want a cut of meat. For centuries it was a scarce commodity, but today many of us expect to find it on supermarket shelves at an affordable price and on a platter. We do not have to think about where it came from. After all, more than half of humanity no longer sees cows grazing, chickens flapping their wings, or live pigs… unless we plan a visit to a farm or take a trip to the countryside. It is not surprising, therefore, that we have changed our relationship with this food and that we buy pieces of meat without thinking about the hands involved, the tons of feed, fodder and pasture that fatten the cattle and, above all, their environmental repercussions. It is a phenomenon that has broken with centuries-old tradition and has occurred at the same time as the livestock industry entered a race to produce a higher quantity and at a better price.

The environmental impact of the livestock farming we are currently practising is enormous. Because it translates, fundamentally, into deforestation: by fires caused by uncontrolled burning, by felling in search of new pastures and by clearing land to grow cereals for animal feed. The figures speak for themselves: since 1990, the world has lost 420 million hectares of forest due to this cause, according to this report published by the Food and Agriculture Organization of the United Nations (FAO). But the list of consequences goes on, because in addition to deforestation, there are other impacts:

Faced with this situation, the most diverse proposals for the future are appearing on the map, ranging from rethinking livestock farming based on the circular economy, to marketing products at kilometre zero, to insect farming for the transformation of organic matter into high-value raw materials. Fortunately, more and more innovative initiatives are being proposed every day to minimise the impact of livestock. 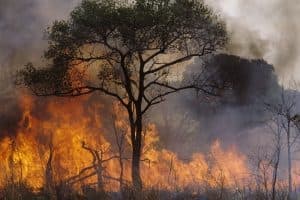 A public debate: the livestock farming we want

But it is not just a matter of not being a problem, but of going beyond that and making the livestock farming of the future also a solution to our current environmental crisis. This was recently stated by the current Director of FAO in the opening remarks of the Sub-Committee on Livestock meeting: “Globally, we face a number of serious challenges; in particular, increasing hunger and malnutrition, poverty, conflict, loss of biodiversity and degradation of natural resources… Livestock can help address those challenges”.

Although per capita meat consumption in some developed countries is stagnating or even declining, global demand for livestock products continues to grow. It is estimated to grow by up to 50% by 2050 due to the logical pressure from developing countries, where the dietary benefits of animal-based foods are so far less accessible. So, while the sector is growing at a rapid pace to meet the growing demand, an opportunity arises: to ask ourselves what kind of livestock we want to have.

“We are all aware of these problems and continuing to do everything the way it has been done up to now is no longer an option. We are also aware that the livestock sector can contribute to the solution”, said General Manager Qu Dongyu.

This is how FAO is tackling the livestock transition

FAO is helping countries adopt better livestock practices to ensure food security, nutrition and poverty reduction. It does so through four improvements that are part of FAO’s Strategic Framework 2022-2031.

Help more people increase livestock productivity. In order to facilitate the political dialogue towards sustainable livestock farming, the organisation promotes initiatives such as the Global agenda for sustainable livestock. This partnership brings together multiple parties committed to the sustainable development of the livestock sector through dialogue, consultation, joint analysis and an agenda of actions.

Livestock activity has the power to solve micronutrient deficiencies in some populations and ensure food security. Its contribution can also curb antimicrobial resistance, a problem that threatens the health of animals and humans.

In the case of low- and middle-income countries, FAO works to identify technologies and possible interventions. It is in this context that the “Enteric Methane Reduction” initiative arose. This gas is a product of the digestive process of ruminants and is environmentally very costly.

4. A better life for all, leaving no one behind

Finally, livestock farming can help vulnerable pastoral communities improve their quality of life. Many of the world’s poorest people depend directly on livestock for their livelihoods, and livestock value chains are the third most important source of income globally, after crop production and off-farm employment.

After reading this article, how much is that platter of meat from the supermarket worth?